Camp Tamarack/Ortonville’s Hebrew immersion village, K’far Ivri, lasted only around twenty years, but original campers there – the “Kfarniks” – feel a lasting  connection to it and to each other.  Of the fifty-some campers and staff from the summers of 1964, 1965 (and a few from 1966), thirty-five participated in one way or another in a virtual camp reunion in February.  The reunion was the brain-child of Barbara Harris Klaristenfeld (now of Encino, CA) and Doris Rubenstein (now of Richfield, MN) who were together at K’far Ivri in 1964 and 1965.

“Thank goodness people were able to have everyone’s names in the Zoom boxes or we might never have recognized each other after more than 55 years,” Doris admits.

Prior to the event, campers were invited to send in short autobiographies that were shared among the participants so as to make the most of the online time they’d have together.  Many mentioned the same experiences as being particularly memorable or influential in their later lives: studying the Book of Jonah, or participating in Havdalah services, eg.

There was a moment of silence for the six campers who are deceased.  And the event ended with the group singing the K’far Ivri song. There’s some interest in having an in-person reunion someday.  Maybe at Camp Maas? 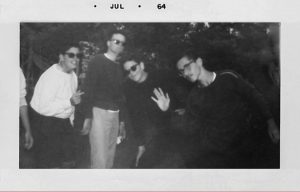