The Alumni Spotlight gives us the opportunity to catch up with a Tamarack alum, hear about where they are now, and learn how Tamarack Camps shaped them. We are thrilled to check in with Meredith Berlin & Sydnie Saltz. Read their story below! 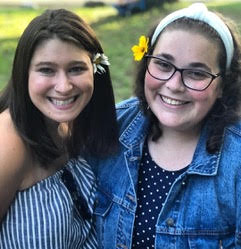 When did you attend Tamarack Camps? What villages or programs were you part of?

Sydnie Saltz: I attended Tamarack Camps as a camper from 05-07 as a Shiffman and Fishman and then returned as staff from 2016- 2021 minus 2018. I have worked in Fishman, Charach Sheruth, Kaufman Specialty, Shiffman, Camp Driver, Camp Photographer, and  Atid Supervisor

What lessons did you learn from camp?

MB: I learned many different lessons at camp but the one that sticks out the most to me is problem-solving skills. While working at camp, I was challenged to think on my feet about various issues while also managing the health, safety, and fun of all the campers and staff. Camp also taught me to be flexible and go with the flow and that it is okay to be spontaneous! Not everything in life needs to be planned out!

SS: I learned that it is always okay to be yourself, everyone is a little goofy at camp!

What are you up to now personally and/or professionally?

SS: I am the Program and Social Media Coordinator at Temple Beth El. Aliyah BBG Advisor and Recent Puppy mom to Winston.

How did camp impact how you live your life today?

MB: I would honestly not be where I am today without camp. Camp showed me my true passion for helping people, specifically children and young adults. It has given me many different experiences that I am so grateful for that have helped to shape me into the professional that I am. Camp has truly given me so many role models and my best friends, especially my roommate Sydnie.

SS: I grew into the career that I now have today from my time spent at Tamarack. I made friendships that will last a lifetime, my current roommate is my forever camp friend Meredith.

Why is Tamarack Camps “The Greatest Place on Earth?”

MB: Camp has shaped me into the person I am today. It has taught me how to be a leader and how to be a better human being. Tamarack has given me some of my best friends and the best role models I could ever ask for and allowed me to have a lasting impact on so many different people. When I was 7 years old, I never imagined that I would love a place as much as I love camp.

SS: There is an instant rush of happiness that runs through my body the second I turn onto Perryville Road and the sense of peace that being in the outdoors with all my favorite people brings me or the smile on the camper’s faces when they do something really cool or challenging for the first time. Camp will forever be my second home no matter where I am in my life.

MB: I have so many camp memories, but I think the one that means the most to me is getting to see my campers grow up at camp. I have gotten to see my first campers go from shy Berman girls to this past summer being counselors and being the same age that I was when I first met them. I have also had the pleasure of seeing my Shiffman campers grow up over the past few summers at camp. From getting to be there when they first stepped off the Tamarack bus to start their camp journeys to know when most of them are starting middle school! I am so lucky that I have gotten the opportunity to be a little piece of so many people’s camp’s journeys as well as have had so many people be part of mine.

SS: My favorite camp memory was getting the chance to be the Camp Driver in 2019, no not a “Big Old Green Bus driver” but the main in-camp driver. This position gave me the opportunity to be the “Face of Tamarack Camps” and welcome all our international staff to Camp and America, it was truly a memory I will never forget.

MB: Shabbat up at camp with all of my past camp friends and staff

SS: Havdallah under the stars with all my camp friends