Home / Blog / Going Back in Time with Steve Grossmann

Going Back in Time with Steve Grossmann

Tamarack Camps has tens of thousands of living alumni whose journeys have taken them all over the globe. Today, Steve Grossmann shares about his time at Tamarack Camps and the impact it has had on his life. Steve met his spouse at camp! 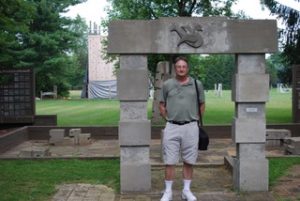 When did you attend Tamarack Camps? What villages or programs were you part of? I was a camper on Senior Side at Brighton in 1967. At Ortonville, I was a camper in DeRoy in 1968 and boy Pioneer In 1970 and 1971. I started working as a staff in 1973 and 1974 in Village Maintenance. In 1975 I was Assistant Village Maintenance Supervisor. 1976 and 1977 I was a counselor in Sheruth Village with Elliot Sorkin as the supervisor. In 1978 I was the supervisor of DeRoy Village where were had incredible international staff. Then, in 1979 I worked as the Land Sports Director along with the late Andy Krafsur. I returned in 1981 to run a two-week sports camp for girls and boys (10 & 11-year-olds). At the camp, we had a few professional athletes come to us including Kent Benson of the Detroit Pistons and a professional soccer player from one of the old MLS teams. Our biggest success was when the kids kept practicing and honing their skills and eventually beat the boys all-star team that was one year older than they were.

What lessons did you learn from camp? The lesson that I learned is that it was no longer about “I” but it was about ” we”. In almost every situation in camp the “we”got things done efficiently, and usually without commotion. This is everything from cleaning the bunk, to getting ready for the meals, to exploring new activities, and finally leaving camp for hiking or canoe trips. Once the lesson is learned one has a new appreciation for what life is like outside the protective dome of camp.

What are you up to now personally and/or professionally? I am presently retired from full- time work. I work on personal investment, either for myself or dealing with stocks, land or other commodities.

How did camp impact how you live your life today?  Tamarack Camps’ impact on me was that it established long term relationships that I still have now. I met my spouse there. It taught me how to use interpersonal development in dealing with others. Camp ingrained to me that the “we” aspect of life is more important than the “I” aspect.

Why is Tamarack Camps “The Greatest Place on Earth?”  It is “The Greatest Place on Earth” because it gives staff and campers a place to belong to. It will allow the children to do activities that they could not do in the city. It gives everyone a sense of companionship. When you see someone with a Tamarack Camps shirt on, one already has a common link to a place. THEY ARE NO LONGER A STRANGER, but common denomination to a history that goes back 100 plus years.

Was there a staff member that made a lasting impact on you and why? My first counselor David Maselioff. I was just a skinny kid, during 3rd session Brighton in 1967 senior side. My best friend Ken came with me that summer and we had David as our counselor. Many other kids from my development had him in the first session and said he was the best. He was tall, strong, with big curly hair and he could do everything better than anyone else. He was very admirable, but he always had that sense of compassion. He would listen if you had a problem or were just homesick. One of the truly nice things that he did happened after camp. He drove his car to my development and spent time with everyone who had him as a counselor.

Favorite camp memory: My favorite memory is something that could not happen in today’s world. In 1977 I decided to take my Sheruth boys bunk on a 4-day hiking trip to WildWood Recreation Area. Every camper went to the trip center to fill their backpack with an equal weight of foods. We traveled out the back entrance and walked the 2-4 miles to Wildwood Park. We made a campsite on one of the marked areas. We had the tents up and started to explore. We cooked, hiked, explored the Willwood area throughout the days, but the most exciting thing that we did was to swim and relax by their crystal blue lake. The campers loved spending hours and hours in the warmth of the day and cooling themselves in the lake. When the four days had passed we bundled and cleaned up our area. We returned unscathed to Tamarack Camps without ever having a fight or disagreement in the days away…. Amazing kids!

Interested in being featured in an upcoming alumni spotlight? Fill out this form and stay tuned for the next spotlight in two weeks! Register for Tamarack Nation to start networking with fellow alumni today!